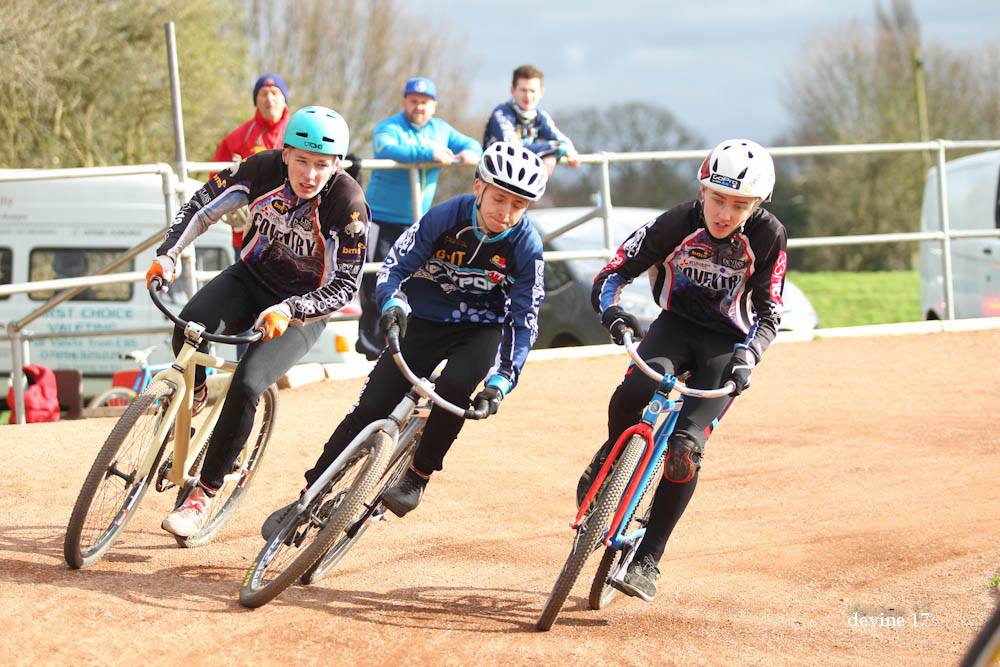 A much stronger Newport outfit, differing from the first leg at the Olympic Sports Village two weeks ago, made the journey from South Wales, with Team GB members Mark Carmichael and Jack Harrold both in the line up. British champion, Ben Mould was expected but was a no show, meaning Newport only tracked 7 riders.

Coventry were also at near full strength, with only Dominik Rycharski missing from their line up, who could have made all the difference for Coventry’s young and inexperienced side. Joe Andrews was unavailable so promising youngster Ben Wells stepped up.

In dry but windy conditions, Newport took a steady lead, only to be pulled back courtesy of a Grimes/Hambidge maximum heat advantage against lone Newport rider, Callum Gower.

That was the way of it for the remainder of the first half, with both sides trading blows, and Coventry’s riders coping relatively well with the challenge. None more so than heat 9, when Ollie Morris and Matt Hambidge reversed a 7-3 against into a 6-4 advantage on the last lap of the first half. It was just deserts for both riders, who received rapturous applause from the home riders and fans.

At the break, the Sabres trailed by 5 points, but with plenty of positives to take into the second half. However, Newport came out strong and notched 3 heat advantages in the first four races.

Coventry steadied the ship and managed to fill the middle places of the next three heats, much to the delight of team manager Lee Marsh, before Grimes and Hardie almost gave the home fans something to cheer but for a smart race by Newport due Davies and Bennett, managing to split the Coventry pair before Hardie could hit the front.

Newport’s GB squad members Harrold and Carmichael signed off heat 18 with an expected 7-3, which perhaps gave the scoreline a greater margin than the match and close racing suggested.

Grimes rode unbeaten again, despite doing his best for his partners, who on this occasion were outfoxed by the strong opposition. However, the main plaudits were saved for Ollie Morris and Matt Hambidge, who both had their finest matches to date.

Morris’s finely executed pass on Davies in heat 9 was classy, while reserve Hambidge forced his way into third down the same straight. Both riders bringing home a their best scores.

Team boss Lee Marsh said: “Our team talks have been centred around staying out of last place this season. Although we still filled the majority, it wasn’t anywhere near the 15 or 16 we were getting last season. It’s a real positive for us.

“Ollie and Matt were superb today. We know our riders have potential but many lack self belief. We’re doing the right things in training and today that showed. It’s been a great pre-season.”

Earlier in the day, Coventry displayed some of it’s new talent with a challenge match between it’s two clubs, Brandon and Coventry.

Brandon were the victors by 78-70, but there was plenty of close racing, with many of the riders trying out new tactics to mixed success. Ben Wells top scored for Coventry, while Cameron Gill’s hardwork in training paid off with a fine display for Brandon.